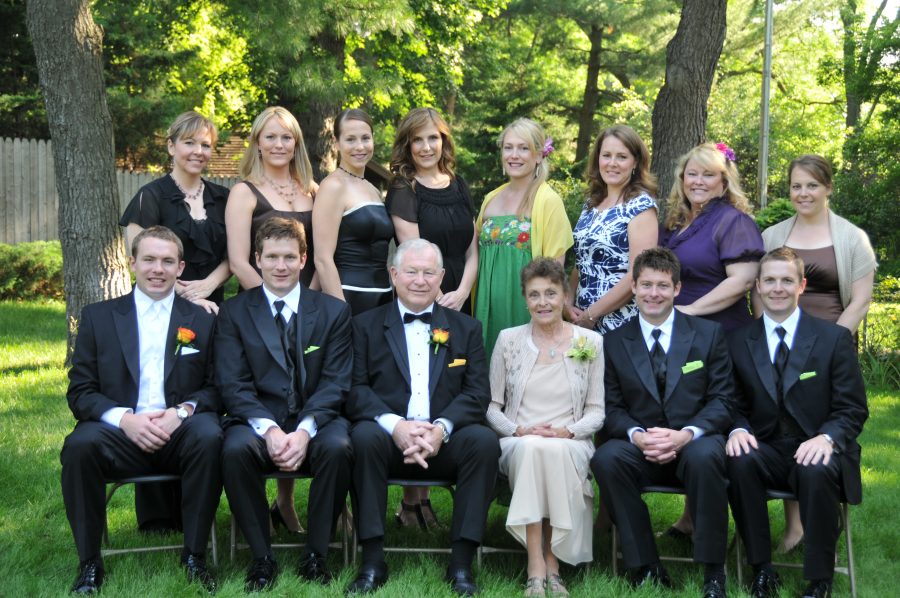 “As for me and my house, we will serve the Lord.”

Church and family have been interchangeable words for the Easley family for many years. Four generations and counting, to be exact. And what better way to honor that commitment to Church and family than to establish a school endowment at Cathedral of the Risen Christ that will provide financial security and support for years to come?

The Easley Family Cathedral School Endowment was established in July 2018, to support the school and continue its tradition of providing a strong spiritual and educational foundation for its students and families. It was initiated as a gift to George Easley on his 80th birthday from his children to honor him and his constant commitment to supporting his Church family.

George’s youngest son, Joseph and his wife, Sally enthusiastically explained how the new Easley Family Endowment came to be, and it all began with a strong commitment to their Catholic upbringing and home. They feel strongly about the need to get involved and are happy to advocate for the needs of the Church and school by sharing how they found an opportunity to give back.

Joe and Sally are a young family with three boys whose love for the Catholic Faith and Church family is evident from the moment you begin talking with them about their life. They are among the 3rd generation of Easleys who live and worship in the Cathedral neighborhood.

“I’m the youngest of 12 kids. We all went to Cathedral. I’ve always been around the church and school,” Joe explained.

George Easley grew up in Lincoln, one of seven children in a large and faithful Catholic Family. Their family home, like their faith, has been shared with multiple generations of the Easley family. His parents, Robert and Kathryn first purchased their home on Sheridan Boulevard specifically because it was across the street from their church and knew it would be the perfect place to raise a family in their faith.

They were among the first parishioners here, when it was still the little garage church before Cathedral was built and were co-founders of the adoration program. It was in this house that Bob and Kathryn raised 7 children, who all attended Cathedral of the Risen Christ Catholic school.

Eventually, Bob & Kathryn moved just four houses down the boulevard, and their son, George and his wife, Joanne purchased the Easley family home. There, George and Joanne raised their 12 children, all of whom also attended Cathedral School. For more than 40 years they attended Mass weekly – George daily – and followed Bob and Kathryn’s example of faith and commitment to their family.

George’s sister, Kathryn became a Benedictine Sister in South Dakota. Another sister married and moved to a home just down the street where her kids were also able to attend Cathedral school and grow up with their cousins in the neighborhood. George also has a brother in Kansas City, one in California, one in Oregon, and another in Omaha. They all grew up in the beautiful brick house across the street from Cathedral.

Sadly, in 2010, George’s wife, Joanne passed away. It was around this time that their 12 children, who had mostly all grown and moved away for college and careers, started moving back home. Joe and Sally moved back from Chicago in 2009, just before Joanne died.

Now the Easley Family home across the street belongs to Joe and Sally, and their 3 sons, the oldest of which started Kindergarten at Cathedral school this year.

Proposed initially by Joe, Sally, and recently assigned pastor of Cathedral, Monsignor Nemec– the idea was sparked during one of many of their earnest conversations about the growing needs of the school and the dwindling funds available to address them.

As a finance major in college, as well as the son of a Financial Advisor, Joe understood the importance of saving money and planning for the future. Not satisfied with the idea of giving a one-time gift to finance one of the many needed school building improvements, Joe and Sally discussed their desire to see Cathedral school have more of a long-term solution.

“There have been renovation projects at Cathedral, like a new entrance, that I had asked my father to contribute a lump sum to in the past, but George didn’t really want to do that, he likes the idea of establishing something that’s going to be around for a long time,” said Joe.

“That’s the financial advisor in him!”, laughs Sally.

At this point, they learned about a new Cathedral endowment established to benefit the needs of the school – one that is still new and growing. The Monsignor Tucker School Endowment was initiated in 2017 by Monsignor Nemec, who saw the need as soon as he was transferred to Cathedral from St. Teresa’s.

After learning more about the Monsignor Tucker Endowment, Joe and Sally knew this was the perfect solution and got to work planning how to make it happen. “Monsignor really helped us understand the magnitude of what endowments can do. I didn’t understand at first what they are,” admits Sally. “I thought it was a memorial for when someone dies, but endowments are totally different.”

Joe added, “It’s a retirement plan where you never touch the principal, so it’s an awesome idea! In grade school I remembered hearing about a “large donation, but now it’s more than half gone, and more is being drawn from it. I wondered, ‘how is that not invested?’ That’s how we circled back around to endowments.”

It just so happened, that Joe’s father George, had a milestone birthday coming up. He was to turn 80 years old on March 4th, and Monsignor Nemec suggested they establish an endowment in George’s name as his gift. An endowment fund requires a minimum of $10,000 to establish, so Joe and Sally got to work coordinating with other Easley family members about making donations to start the fund.

They began planning a big family birthday party for him on March 4th, 2018.

For George, faith and family are the most important things to him and his family knew that in terms of birthday gifts, there wasn’t much he really needed. But he loves to see his children and grandchildren get involved in and give to the Church.

“It’s not exactly what he’d been thinking of doing,” explained Joe. “We introduced the Endowment Gift to him at his birthday party. We had a special Mass for him and all his family came. Then we came over to the house and Monsignor announced that we were establishing this fund in his name. My dad’s really excited about it.”

“I think George took it a step farther, because he didn’t want it to be just about him,” said Sally. “He thought his parents should also be recognized – he felt strongly that it should include the whole Easley family. We think establishing this endowment in the family name is a great way to honor them all and everything they have done for Cathedral school and parish.”

So, they changed the name to the Easley Family Cathedral School Endowment.

As it was, the family came up a little short of the $10,000 required to establish the Endowment, and so in true Easley tradition, George contributed the remaining amount, without hesitation. After all, this would help ensure his extended family would be supported for many years to come.

“A big part of our family is the Church and our house feels like it’s in their yard. When it’s your family, then giving money to sustain it is nothing. I mean you give money to your own household and the Church is the same – it’s an extension of that,” said Sally.

Cathedral of the Risen Christ parish and school are grateful that the Easley Family established this fund and started the conversation to help others learn more about the needs of the church and the opportunities to give.

If you’d like to support the Easley Family Cathedral School Endowment with a direct contribution, or initiate a new and similar endowment fund, contact the Catholic Foundation of Southern Nebraska by calling, 402-488-2142 or clicking the button below.

What is an Endowment Fund?

Endowments are an excellent long-term solution because they are a self-sustaining source of income. An endowment is structured so that the principal sum is kept intact, while only the investment earnings are distributed – up to 5% annually – to support the beneficiary in perpetuity. Once established, anyone can make additional contributions to the fund in any dollar amount.

{
A big part of our family is the Church and our house feels like it’s in their yard. When it’s your family, then giving money to sustain it is nothing. I mean you give money to your own household and the Church is the same – it’s an extension of that.
Sally Easley